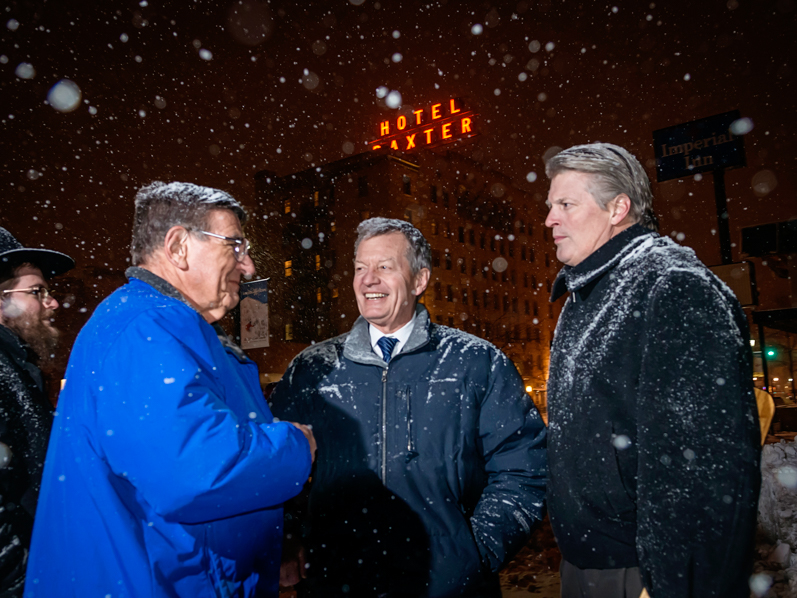 Snow drifted down on the crowd as the historic “Hotel Baxter” sign was relit Thursday night, once again glowing above the downtown sky.

“A crown jewel of Bozeman,” U.S. Senator Max Baucus told people gathered outside at the corner of Main Street and Grand Avenue just before the sign was turned on.

The sign was erected in 1929 on the roof of the seven-story Baxter Hotel, on the corner of Main Street and Willson Avenue.

The sign’s builder, August H. Lake, intended it to be seen from as far as Butte.

“It is not claimed that the letters can be distinguished for such great distances, but the reflection of the electric light in the sky from the sign will be intense enough to be easily located and thereby serve as a beacon for travelers as far away as the Butte hill in the west,” stated an article published in the Chronicle when the hotel opened. “One will also be able to see the glow in the sky from all highways entering Bozeman for great distances.”

The sign has been sanded and repainted black and yellow, colors believed to be original.

Baucus announced that he and his wife Mel are moving to Bozeman from Helena.

As the red, neon “Hotel Baxter” sign lit up the cold evening, the blue light, a well-known signal that fresh powder is falling at Bridger Bowl Ski Area, flashed alongside it.

The Baxter once housed 76 hotel rooms. The hotel was “condominiumized” in the 1980s and is now home to about 20 residential units, Ted’s Montana Grill and the Bacchus Pub.