Bozeman Magazine: The History of the Baxter Hotel 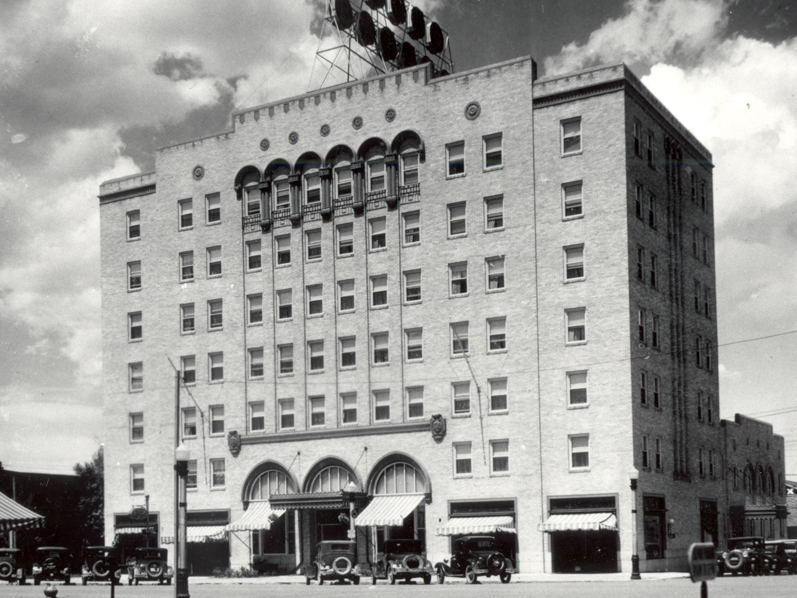 Back in the 1920s, in the days before commercial airports, interstate highways, and chain motels, travelers arriving in a city always headed downtown to find a good meal and a good place to stay. Every town worth its measure had a downtown hotel or two, and a good one was a source of immense pride to the community. Not only did a landmark hotel attract visitors and business, it became a center for the town itself, a community gathering place and a home for civic events. Bozeman’s Baxter Hotel was designed to serve just such a role, and it has done so not for the better part of a century, the social and architectural focal point of the city’s downtown.

The origins of the Baxter date to the mid-1920s, an era when Bozeman was still a mid-sized farm town, roughly the same size as Livingston and thoroughly overshadowed by the urban metropolis of Butte. Back then, the city’s primary hostelry was the Bozeman Hotel, an imposing, rambling structure that dated from the 1890s. Though it was still the largest building on Main Street three decades later, the Bozeman was beginning to seem faded and out-of-date in the faster-moving twentieth century. The city’s civic and business leaders felt this keenly, and worried that the lack of an up-to-date hotel would make it harder for Bozeman to grow. The town needed a new, modern hotel.

Their goal in mind, Bozeman’s leading citizens set to work. In 1927, a group of sixteen prominent Bozemanites, led by Eugene Graf, gathered to form the Bozeman Community Hotel Corporation, which would build the new hotel. Shares of stock in the new company were sold to raise construction funds, and some 250 of the valley’s leading citizens eagerly participated in the venture. Among the largest contributors was a Gallatin County rancher named George Baxter, and the future hotel was named for him in honor of his great support.

There was probably little question about who would be hired to design the new building. The job went to Fred Willson, Bozeman’s most prolific twentieth-century architect. The hotel was probably Willson’s largest commission to date, and gave him the opportunity to experiment with the Art Deco architectural style, just coming into vogue in the late 1920s. There’s little question that his design was a success, and the Baxter project paved the way for Willson’s later Art Deco projects in Bozeman, including the landmark high school building now known as the Willson School.

Willson designed a stately, seven-story hotel facility that would become the tallest building on Bozeman’s Main Street. Considerable effort went into the creation of the hotel lobby and other public spaces, which demanded a combination of functionality and elegance. Willson chose a Mediterranean motif for the two-story lobby, with walls faced in an imitation travertine material. Terrazzo floors, a beamed ceiling and Spanish-style lighting helped complete the effect. This grand design remains largely unaltered today.

Originally, the rear half of the hotel’s main floor included both a dining room and bar, as well as an imposing “lounge” area with Spanish décor and a two-story-high ceiling. The former lounge was incorporated into the dining room decades ago, and its ceiling lowered to create the current ballroom space off the mezzanine.

Perhaps surprisingly, Willson reserved his highest level of design detail for the hotel’s new coffee shop, which was styled to evoke the atmosphere of an historic English pub. The dark-stained woodwork and heavy tile created one of Bozeman’s most unique and inviting interior spaces. Other public areas included a mezzanine-level writing room, and a barbershop and beauty salon in the basement.

The hotel’s upper floors included a total of 76 guest rooms, both with and without full baths. Several rooms on the second floor were created specifically for traveling salesmen, giving them added space to display product samples. Eight small rental apartments occupied the top floor.

Construction work on the Baxter continued through 1928, and the hotel was finally ready for occupancy in 1929. The building formally opened to the public on March 16, 1929, an event described by the Bozeman Daily Chronicle as “really an epoch in the history of our city.” That night, some 250 invited guests enjoyed an elegant banquet and dance to commemorate the grand event.

A couple of months later, the building received a dramatic final touch — a 32-foot-high neon advertising sign atop its roof. The sign’s 400 feet of neon tubing proudly announced the Baxter name, its letters large enough to be seen for miles. (Somewhat improbably, the sign maker claimed that the neon glow could reach all the way to the Butte hill, some 70 miles away.)

For the next fifty years, the Baxter remained Bozeman’s Main Street landmark and its favorite place to stay, though the great neon sign went dark sometime in the 60s or 70s. And by that time, America’s travel tastes had changed; most travelers now arrived in town by car, and preferred the new motel buildings that dotted the outskirts of town.

Realizing this trend, the Baxter’s owners decided in 1981 that it was finally time to shutter the hotel, and by the following year the building’s upper floors had been converted to residential condominiums. The great public spaces on the main floor endured, though, and with recent restoration work the grand lobby now looks as good as ever. It remains the most imposing public space in downtown Bozeman, a meeting place for the twenty-first century, and generations to come.

And what of the building’s giant neon sign, once visible for miles around? Though the neon was dark for decades, recent generations of Bozemanites have still looked to the Baxter’s roof at night — looking for the famous blue light that alerts skiers of new Bridger Bowl snow. But the blue light will once again have company in 2013, now that the original Baxter Hotel neon has been lovingly and meticulously restored. An official “re-lighting” ceremony for the old sign is scheduled for the evening of January 10th, so be sure to look up as you walk along Main Street.

Mark Hufstetler arrived in Bozeman as a hopeful college student nearly thirty years ago, promptly fell in love with the place, and has been here ever since. He is a professional historian and small business owner, and is the chair of the City of Bozeman’s Historic Preservation Advisory Board.